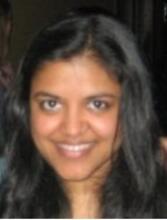 Amruta Sarma knows what she wants.  And what she thinks the world needs.

“Every generation has an issue that gets solved by the primary thinkers of that day and age.  I strongly believe that environmental health and climate change are the pressing issues of our age,” Sarma told me.

Amruta will be traveling to India in August to begin a year-long project researching the essential criteria for redefining heat waves, and monitoring the impact of a newly-implemented Heat Health Early Warning System in Ahmedabad.  She is partnering with the Natural Resources Defense Council’s (NRDC – yes, that is where Marshall wants to work on How I Met Your Mother!) India Initiative, and has received funding through a Fulbright Grant.

How did Amruta’s path lead her here?

From as early as middle school, Amruta has wanted to focus on environmental issues.

Indeed, Amruta was very persistent (you will find this is a theme in Amruta’s success story – take notes!) about getting her ideal internship experiences.  For example, Sarma began applying to intern at the Healthy Planet program with NASA when she was 12 years old, although she was sure they would never accept her at such a young age.  But every subsequent year, she kept applying, writing “you may not accept me this year, but you will one year.”  And they did – to a college-level program when she was just 16.

And while Amruta has always been extremely focused, the one thing Amruta lacked was her question: the idea she could concentrate on for her upcoming PhD studies and her career beyond.

When it happened, it happened almost instantaneously.  There was a guest lecturer in Amruta’s Columbia MPH class, Climate Change Impacts on Public Health, who spoke about the work the NRDC was beginning to do in India with heat waves and public health.  Everything Sarma had learned so far culminated at that moment.  She knew this project was meant for her.

“I thought that my training and experience as an environmental scientist could really make a difference in a developing country like India.  At that point, it’s like a light bulb went off.  I said: I could do this.  I could go there and work on the epidemiological side of this project; I could really make a difference, and maybe help save lives.  It’s an amazing feeling.”

This particular research project stood out to Sarma because it really struck a chord within her.

“My family is from India and I’ve experienced what heat waves are like.  But the other aspect of heat waves is vulnerable populations.  Vulnerability is so different in a developing country.  It’s a completely other level of poverty and destitution.  People there live in 2’x4’ shacks that they cover with tarps and are made out of cardboard, that they call home.  They don’t have access to water or electricity.  These are the basics that we in America have come to think of as essentials.  It’s striking because these are the things that make populations vulnerable to things like heat waves.  What makes people in the US able to respond/adapt is that there is some baseline level of existence that everyone has come to expect and it becomes a societal imperative to help people overcome natural disasters; in India when there is a heat wave and babies in hospitals are dying, there isn’t that same public outcry.  For me that really hit home,” Sarma told me in a passionate monologue.

So how did Amruta turn her desire to work on this project into reality?

Shortly after the lecture, Amruta reached out to the NRDC

about getting involved with their heat waves project, and then applied and received a Fulbright

grant to fund the trip.

I make it sound easy, right?

The truth is that this moment was a culmination of years of study, experience, being in the right place at the right time, and a whole lot of persistence.  An undergraduate degree in Environmental Engineering from Princeton, a Masters in Public Health from Columbia University, and the promise of a PhD degree from Yale, which she begins next August: nobody can argue that this isn’t impressive (except for maybe Einstein, who could care less).

Even with this impressive pedigree, when Amruta e-mailed the NRDC several times, she received no response.  So she looked for another way to get in touch with them.  Sarma contacted another professor who had been involved with her Climate Change Impacts class, asking for advice about how to initiate a dialogue with the NRDC.  The professor connected Sarma with a person integral to the project.

Amruta reflected on this process, saying “Once you decide you want something, you really need to go for it.  That’s the thing in our world – everyone is busy all the time and so you have to persist and go out for it.   You have to be your own best advocate.”

Finally getting to the right person at the NRDC, Amruta worked with her to craft the project, and began the process of applying to the Fulbright.  That’s a whole journey in and of itself, but Amruta’s persistence paid off again, when she received this prestigious fellowship.  This research will go towards her PhD thesis at Yale.

Amruta leaves for India in just under a month.  Although it’s difficult and nerve-wracking to leave the country, and her family and friends for a year, she looks at it this way:

“It’s easy to get lost in the details, but I know it’s essential to focus on what I’m trying to accomplish, the best way to get there.  It’s also important not to give up.  There were a lot of times I felt like I didn’t really know what I was doing,” Sarma said, pausing.

“But if it was easy, everyone would be doing it,” she concluded.

Indeed.  Although ironically, Amruta always makes it look so easy.